Mauritius Weather and when to travel

Home
/
Mauritius Weather and when to travel 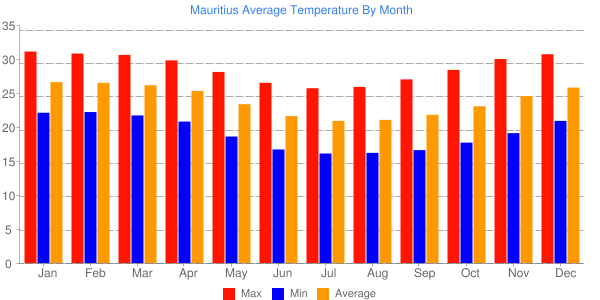 I’ve just returned from a week in Mauritius and we experienced every kind of weather you can imagine! We were moving around the island almost every day and got to experience the multitude of micro-climates Mauritius is made up of.

It could rain cats and dogs where you are, yet only a few kilometres away the sun is shining and there is not a cloud in sight. If you wake up in the morning to grey skies, don’t worry! Go for your shower, have breakfast. Later the sky will be blue.

They often say that you need to be prepared for all four seasons in a day in Mauritius, and that was true of our trip. Curepipe, a town in the centre of the island, is known to always have grey weather because of its location. I doubt I could live there! 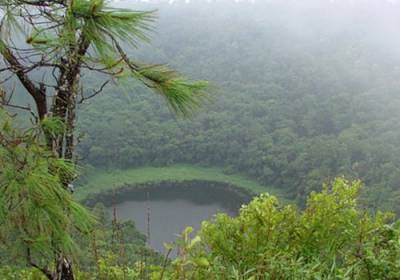 We had one day that started with sunshine during breakfast, the wind blew while we packed our bags, the rain started as we drove out of the gates of the hotel. The GM said the island was crying because we were leaving. We went to our first stop and the sun came out just long enough that we could do the tour and get back on the bus without getting soaked. We then stopped at the Trou aux Cerfs – the crater of the main dormant volcano of Mauritius – and it was the fastest stop ever, and we were all soaked! By the time we got to the Holy Lake, the sun peeped out just enough to ensure that we had beautiful pictures. For our lunch stop, the sun came out in all its glory to show off the beautifully washed gardens of La Chamerelle Rhumerie. Back on the bus and the rain came down again! We were starting to worry that we would have rain for our last two days on the island. But as we arrived at our hotel for the evening the clouds blew off to the horizon and we had a spectacular sunset! And not a single drop of rain until we were sitting on the plane waiting to return to Durban!

But this was my experience of 7 days in October. 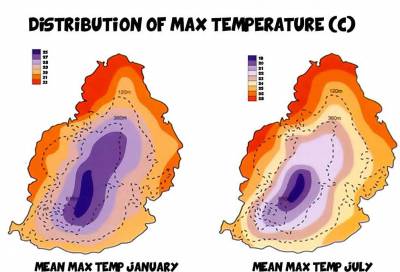 What do the experts tell us about the weather in Mauritius?

In general, the western and northern regions are warmer and drier than those in the east and south. Summertime, which lasts from November through April, sees overall averages of 30 C along the coasts and is slightly lower on the central plateau. Wintertime, from May through October, sees overall averages of 25-26C along the coast and lower on the central plateau. The sea temperature ranges from about 21 to 26 degrees Celsius, depending on the conditions and the season. Heavy rain is common from January through March, and tropical cyclones are a possibility from November through April although there have been a couple out of season.

So when is the best time to visit Mauritius then? 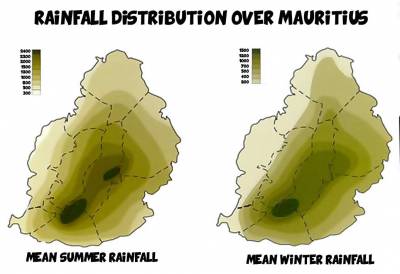 Any time of the year is right for a trip to Mauritius. You could spend a long time debating the best time of year to go. Each season has some advantages and disadvantages and this is why it is best to take into account all the different factors before making your decision on when to visit Mauritius.

The Mauritian summer months of October to Easter are ideal for a Mauritius beach holiday.

For those looking for a warm tropical climate, to spend most of the day on the beach or at sea, this is a great time to visit Mauritius. When you visit during this time the days are long, hot and sticky making swims in the Ocean more refreshing and the breezes on the East Coast, most welcome.

During the winter months of July to September, the temperatures are much cooler and on most days you may not even have to use your air conditioning. It rains less and even when it does rain it’s mainly in the evening or just a passing shower during the day. You still have some strong sun during the day so a tan can still be achieved. As a bonus this time of year also sees fewer tourists. Hotel rates are generally lower, attractions are less crowded, and it is possible to negotiate prices with taxis and shop owners due to less traffic, additionally you do not have to worry about cyclones. The cooler weather during this period with less humidity makes this is the time to engage in many of the inland activities offered on the island such as hiking, quad biking and ziplining. 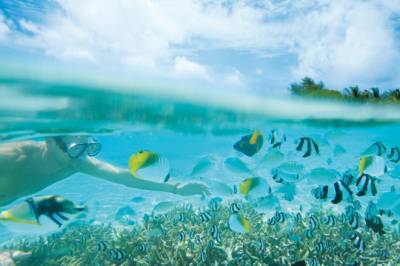 For diving enthusiasts, the clearest waters are between December and March.

Surfers are advised to visit Mauritius between June and August. During this period you are sure to have amazing waves along the west coast of Mauritius, especially in the area of Tamarin and Le Morne.

Kite Surfers are advised to visit Mauritius from mid-March to October.

Anglers will be delighted at the big game fishing available from October to April.

What do the other staff of BeachTravel/Just Honeymoons say about Mauritius weather?

Polly has travelled a few times to Mauritius. In February of 2015 she was staying on the West Coast with her family and experienced a cyclone affecting Mauritius. Although the heavy wind and rain affected the holiday for two days, she was most impressed with how everyone kept them updated. From the hotel’s news channel on the TV, to the garage attendants, and almost everyoneelse they came into contact with. Everyone looks out for everyone else. They were able to go out and experience the island, even though the weather wasn’t ideal. As the weather got worse, they were advised to go back to the hotel. The hotel made a fantastic effort at making their stay as easy as possible. Umbrellas were supplied, additional kids club activities were put on, meals were sent to guests that could not come to the restaurant, updates on the weather were relayed via reception, TV channels and all staff members.

Her previous trip was in June and she was very impressed with how lovely the weather was. They were able to swim during the days. The weather was wonderfully warm during the day, and in the evenings it was only cool enough to need a light pashmina or jersey. 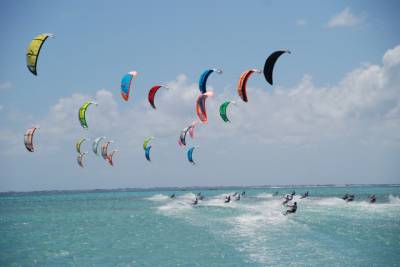 Lizelle has been to Mauritius in March and October. March was definitely warmer than October. In October she would definitely suggest staying in the North West as the weather was much more pleasant. The East Coast can be very windy between May and October, but that cool breeze in the summer months is a godsend.

Edwina adores Mauritius and has travelled a few times. Her favourite months to travel are April and September. On one of the trips in May she experienced a lot of wind on the East Coast, and recommends that you choose a resort that is in a protected bay – as it can make the world of difference just by being on the correct bit of coast! On an August trip, earlier this year, she experienced tropical storms, with high winds and plenty of rain, in the South West, but the North West had beautiful weather.

As you can see from all our experiences, this proves that Mauritius really is a year round destination, as long as you know which area to go to, based on your needs and have an experienced travel expert on hand to advise you! BeachTravel has a full complement of agents that know this island at all times of the year and would love to assist with your next adventure to Mauritius!

We use cookies on our website to give you the most relevant experience by remembering your preferences and repeat visits. By clicking “Accept All”, you consent to the use of ALL the cookies. However, you may visit "Cookie Settings" to provide a controlled consent.
Cookie SettingsAccept All
Manage consent

This website uses cookies to improve your experience while you navigate through the website. Out of these, the cookies that are categorized as necessary are stored on your browser as they are essential for the working of basic functionalities of the website. We also use third-party cookies that help us analyze and understand how you use this website. These cookies will be stored in your browser only with your consent. You also have the option to opt-out of these cookies. But opting out of some of these cookies may affect your browsing experience.
Necessary Always Enabled

Performance cookies are used to understand and analyze the key performance indexes of the website which helps in delivering a better user experience for the visitors.

Analytical cookies are used to understand how visitors interact with the website. These cookies help provide information on metrics the number of visitors, bounce rate, traffic source, etc.

Advertisement cookies are used to provide visitors with relevant ads and marketing campaigns. These cookies track visitors across websites and collect information to provide customized ads.

Other uncategorized cookies are those that are being analyzed and have not been classified into a category as yet.

SAVE & ACCEPT
Save, stay & play in Mauritius! 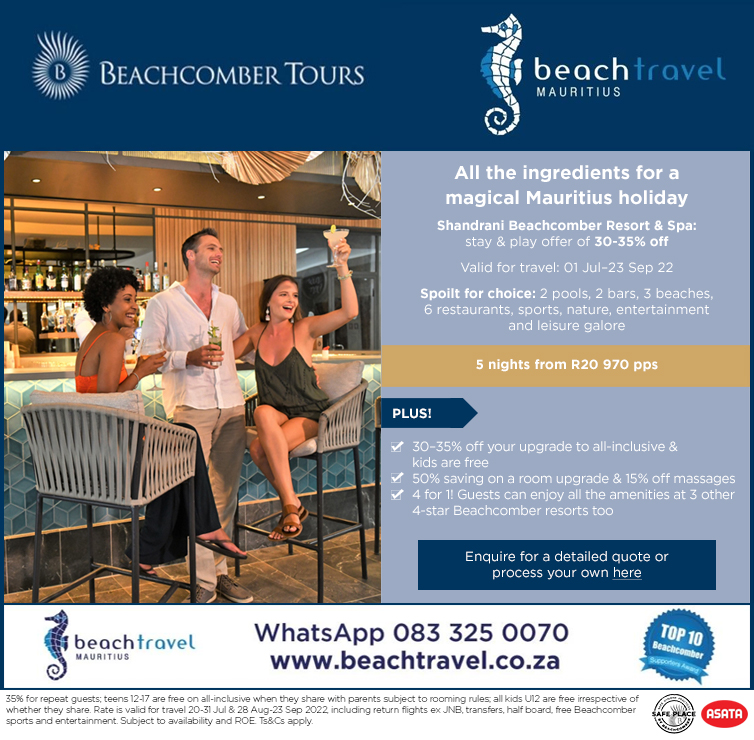